BMW plans for a future where nobody buys cars

BMW has turned Seattle into a testbed for how car companies can stay relevant in changing times.

The German carmaker is experimenting with a range of mobility services to try to connect with people uninterested in buying a car.

BMW isn't the first automaker to embrace trends like ride-sharing and mobility apps. Competitors such as Daimler (DDAIF) and GM (GM) operate car-sharing services. But BMW's tests in Seattle are unique in how the automaker is managing a fleet of 700 sedans and SUVs.

ReachNow, a mobility venture that BMW launched a year ago, is experimenting with a hybrid model of ridesharing and carsharing. Sometimes a professional driver uses a fleet vehicle to give rides, much like Uber or Lyft do. The next day, that car might be parked on the street for customers to reserve and drive, a model akin to Car2go, GM's Maven and Zipcar. 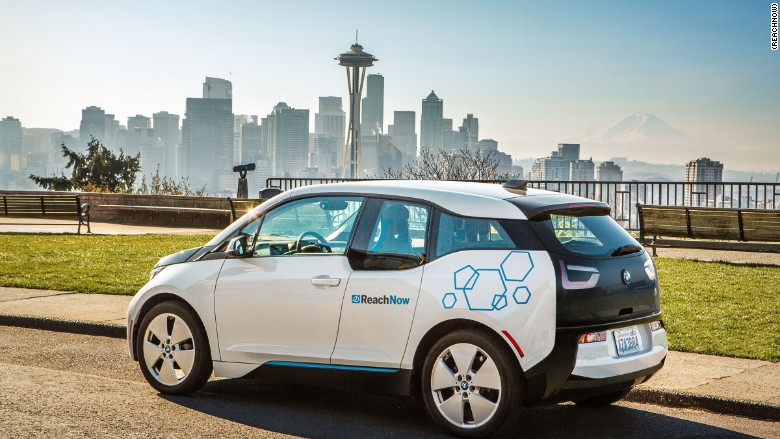 "You'll want more drivers driving people around on New Year's Eve, and you'll want more cars on the road to take trips with on July 4th, just because the nature of those holidays," Banfield told CNN Tech.

BMW's ridesharing service, called ReachNow Ride, is starting small. The pilot tests are on an invite basis with about 4,500 members, who have registered on the app. ReachNow has roughly 100 professional drivers, who work for a third-party company that BMW has a contract with.

Related: Your car's data may soon be more valuable than the car itself

Banfield told CNN Tech that he expected the number of riders included in the pilot test to triple in the coming weeks. But ReachNow won't try to scale to the size of the biggest players in ridesharing.

ReachNow has positioned itself as a premium ride service. The cars include chocolates and bottles of water. A passenger can set the car's temperature to exactly 68 degree -- or whatever they desire -- before even stepping foot inside it.

In one Seattle office building, BMW has parked three ReachNow vehicles that are only available to people working in the building. Customers must return the vehicles to the building.

BMW is expanding ReachNow in Seattle as automakers brace of disruption. This week, Ford replaced its CEO, citing a time of unprecedented change. Electric, connected and automated vehicles are expected to transform mobility in the coming years. Car companies don't want to be left behind.

Related: Why Ford fired its CEO

Part of BMW's Seattle experiment is exploring long-term car rentals. Its fleet of 700 vehicles can be rented for up to five days, or longer upon request. Rentals start at $80 a day in Seattle and Portland, Oregon, and $110 in Brooklyn. (ReachNow launched in Portland and Brooklyn in the fall of 2016.)

Banfield pointed to the simplicity ReachNow offers, such as not having to deal with upselling or needing to return a vehicle with a full tank of gas. Customers don't need to trek to an airport to pick up the car. There's no debate over whether to pay for insurance, because it's already included.

Down the road, Banfield said it isn't out of the question for ReachNow to test scooters in a city. While the future of transportation is up in the air, one's thing for sure -- automakers will be experimenting.